Building a Music Player in React

Whoever is learning React and wants to build a project with React. There are a variety of blogs and articles to guide a such projects for developers. I do go through those articles but one kind of project is always missing in them. The missing projects are the music player and video player. Both of the projects will give you the opportunity to handle audio and video. You will learn many things such as handling audio for playing and pausing audio.

Today, we are going to build a music player in React. We will look into the following topics:

After completing the project, our music player will look like this.

If this excites you then let’s get started.

I assume that you have knowledge about the following technologies as prerequisite:

The environment setup is easy. You should have node.js pre-installed for running the node related command in the terminal.

Navigate to the directory in which you want to create the project. Now, run the terminal and enter the below command to install react project.

Remove all the boilerplate and unnecessary code. We are now good to go.

We need to install the following libraries to our project:

Install with the below command:

Install it with the below command:

As per the library to import in the file. You can look at it here:

You can look into comments for the explanation of the imports.

Playing and Pausing the audio

Let’s implement the mandatory feature of the player which is playing and pausing the audio.

We need to initialize the useSound with audio. It will return the play, pause, duration, and sound method.

play and pause is for playing and pausing the audio. duration is for the length of the track in milliseconds. sound will provide us with the howler.js method for the sound.

Create a function for handling the play and pause buttons. Here is the code for it.

Now, it’s time to add the UI component of the player into the return. Here is the code for it.

For the cover image, I have used the Loren Picsum for generating a random image.

You can look here for the CSS of the file:

Run the react server. If everything goes well you will be able to see the below screen. 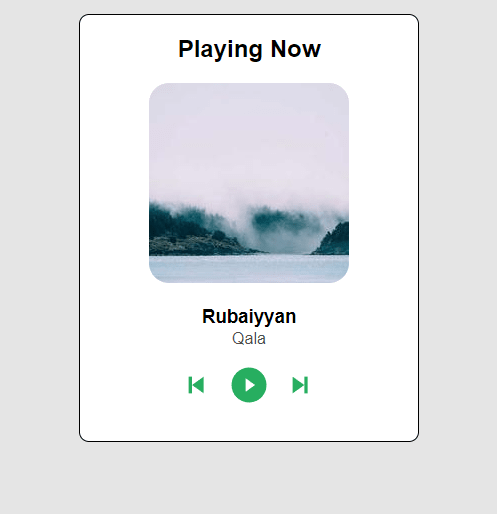 Click on the play button to play the audio.

Now, let’s add the timeline to the player. The timeline will controllable by the user. Any changes to it will change the audio’s current position.

Let’s look into the state that we are using. You see the comments for an explanation of each state.

We are grabbing the duration props from the useSound. As the duration is provided in milliseconds, we have converted it into minutes and seconds.

Now for the return. Here is the code.

After successfully completing the project, you will be able to see the below output.

Note: The music is coming into my speaker.

I have created a codesandbox. You can look at it for the complete project with code and the output.

Note: The song that I used is Rubaaiyaan from Qala. All credit to the creator.

You can work on the music player to add more features such as:

We have created our own music player. This project will help you in handling audio files in React. We have added features of play and pause with the function. Also added an audio timeline with the range input. Users can change the current position of the audio with the timeline. Feel free to add more features to the project.

I hope this project has helped you in understanding a method of handling music in React. Let me know in the comment if you want a video player tutorial too. Thanks for reading the blog post.