Svelte vs React: Which framework to learn in 2023?

In the web development world, sometimes it can feel like a new frontend framework comes out every day! Most come and go, but one thing is for sure: Svelte is here to stay.

That does not necessarily mean you should drop everything and learn it today, though! Always chasing the latest trend can leave you distracted and overwhelmed.

This post will answer should I learn React or Svelte? once and for all.

You’ll see some code examples that explain why React developers go bananas for Svelte, but we also have to be realistic.

React has been around a lot longer. There are more libraries, support, and jobs available.

Let’s start with the one you’ve probably already heard about, React.

React is a progressive JavaScript frontend framework (or library depending on who you ask) that helps you build complex web UIs.

Created in 2013 by Facebook (now Meta) it was able to take a foothold in the frontend web development space pretty quickly.

React at its core is concerned with state and rendering state, which means to use it you have to add other libraries to handle client-side functionality and routing.

Svelte is also a front-end JavaScript framework but with a more all-in-one approach. Svelte has state management, routing, and client-side (DOM) functionality built in. 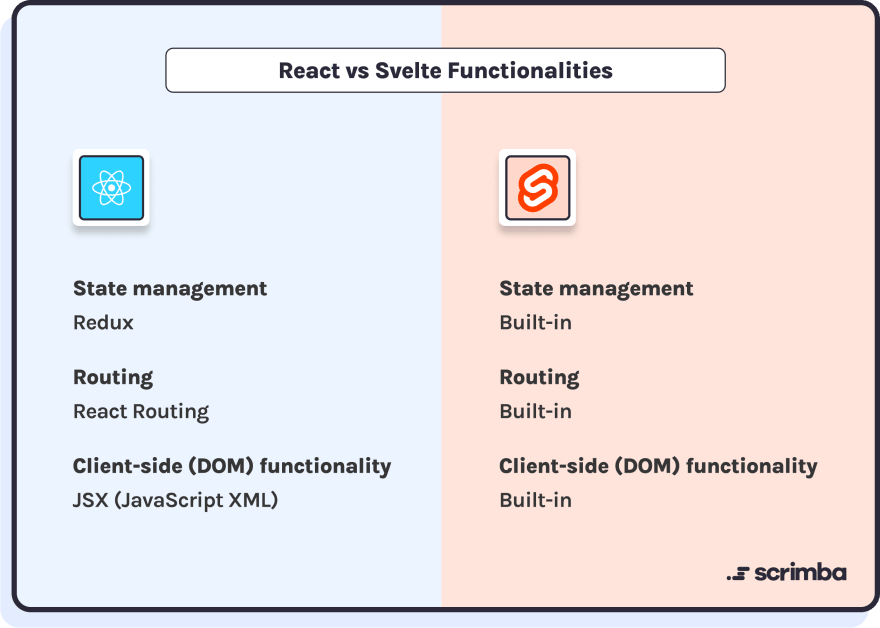 React requirers third-party libraries and tools like Redux, React Router, JSX whereas Svelte has a lot of this functionality built-in. It’s a bit less flexible but more convenient and consistent.

It takes a more behind-the-scenes (magic) style approach where it interprets very basic-looking JavaScript code and handles UI and state management for you:

Svelte was created in 2016 by a developer from New York Times, Rich Harris, for handling complex charts and graphs in a performant way. It grew from there into a highly loved competitor to the likes of React and Vue.

5 differences between React and Svelte

The deployed bundle size of the identical (in functionality) applications we built below is 41.2 kB for React vs 2.1 kB for Svelte. That is almost a 20x reduction 🤯

To get these numbers I built an app with the same functionality in both Svelte and React. We will dive into those apps in React vs Svelte code breakdown section. 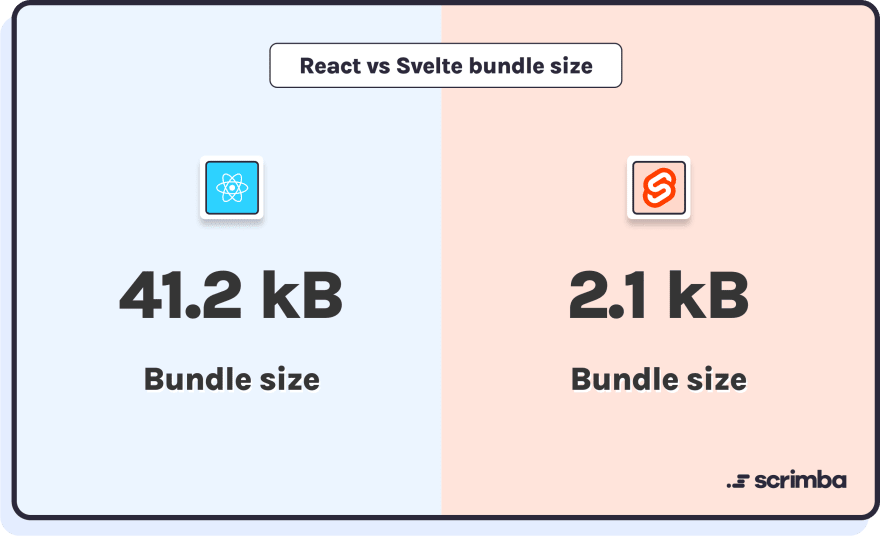 I built an identical app with React and Svelte. Look how much smaller the Svelte bundle is!

2. Svelte is easier to learn because of its simple syntax

Svelte takes a more behind-the-scenes magic approach, allowing you to write very low amounts of boilerplate or syntax sugar to accomplish complex bindings. The templating syntax is just HTML with some extra, which is considerably different and easier to learn than JSX (the React equivalent).

Svelte looks like plain JavaScript but it has the exact same functionality as React. Updating the Svelte variable will automatically update the UI element it is placed in.

Svelte compiles the code you write into basic HTML, CSS and JavaScript. It does not need to be bundled with your code like React!

React.js needs to be present in a bundle to do all the proper shadow dom diffing and creation, Svelte does not use a Shadow DOM to handle UI. Instead, it opts for basic JavaScript element creation functions like document.createElement.

4. React has way more libraries and packages built for it

React has been around for 3 more years and is also the de facto king of JavaScript frameworks currently 👑. Because of this, it has a ton of user and company-created packages.

The user-created packages are usually just to make things like routing, and state management easier or add a slider, lightbox, etc. These are not critical as Svelte has solid options and is compatible/adaptable to most JavaScript plugins.

Where it can get a bit more difficult is some integrations will create React packages well before any other framework. I’ve mostly run into this while working on Web3 projects on Solana and Ethereum.

React Native is one of the most highly used and supported cross-platform frameworks. It gives the ability to use React for creating iOS and Android applications. All from one code base. It has a ton of libraries, support and learning resources due to its maturity.

Although there are alternatives for Svelte like a NativeScript adaption called Svelte-native, these do not have the same reliability and feature set as React-native.

Is React a library or a framework?

Although React is often referred to as a framework, it can be argued that it is more of a library due to its scope. It specifically handles managing the state of a UI and keeping it in sync with the state of data in the app.

Because of this, it requires 3rd party libraries to handle app routing (React Router), UI creation (JSX), and state management between components (Redux).

Svelte on the other hand has all of the above features built in and is therefore more of a complete solution for UI management.

Mike @ HTML All The Things Podcast 💙💛

Is React a library or a framework?

Comparing a React and Svelte project line by line

The best way to compare two pieces of web technology is to dive in and build with them. Building the exact same application can help to see how each library/framework handles different features.

We will take a look at:

What are we building?

Coding is thirsty work so we will be building a simple web app that allows a user to track how many cups of water (or 🍺) they are drinking throughout the day.

With the added bonus of showing a history of each cup that was drunk and when.

We will keep the UI simple to focus more on the underlying framework. (See UI below)

React has several types of syntax that you need to learn. Hooks, state, and templating (JSX) are the main ones.

Hooks – allow you to tap into the lifecycle of the app

State – allows you to update UI elements based on changes in data. It ties ‘state’ (or more simply variable) changes to UI updates

Styling with React components is typically handled from a separate .css (or .scss) file.

Variables are set using the useState hook which allows for the variables to be updated and the UI to render those updates dynamically.

useEffect is used to set today’s date on load of the application.

The JSX template is using basic {} notation as well as standard JavaScript function right in the HTML allowing for variables to be displayed and arrays to be looped over (using .map).

Svelte takes a different approach with a much more ‘behind-the-scenes magic’ style. Logic in looks mostly like pure JavaScript. In the background that code is doing almost the same thing that the React code does.

Svelte still has hooks like onMount and onDestroy but simply assigning a variable and having it fully reactive and accessible in the template (HTML) doesn’t require any special syntax sugar.

Another big difference is you can write CSS/SCSS right in a Svelte component. This is just an option though as you can still import styles just like in React, but I’ve noticed that most Svelte projects use in-style components.

The code above instantiates a cupsOfWater array sets a new date variable to the current date.

A function is declared that creates a new date and stores it in a variable called cup which is then prepended to the cupsOfWater array.

The template section is much closer to HTML with some added functions. Again using {} notation you are able to reference any declared variable from the &lt;script> section. You are also able to use event listeners (like on:click), conditionals (like {#if}) and looping with {#each}.

Explore and play with the code yourself here:

Is Svelte Faster than React?

Yes, all the way from fasting HTML generation to a faster build and development environment, Svelte outperforms React by a significant margin.

All of these see a measurable difference with Svelte having the edge. The larger and more complex your application is, the more the difference will be noticed.

A great performance comparison can be seen in an article from Zeitspace.

Is Svelte better than React?

When starting a new project Svelte has enough going for it that it should always be a consideration.

Having said that, React is still absolutely dominating Svelte in usage. This can lead to issues with 3rd party plugin support, hiring, and longevity of the project.

To counter that though, the very accessible nature of Svelte’s syntax makes it very easy to pick up, especially for React developers. This is something that companies can lean into when hiring for a Svelte project (don’t limit yourselves to Svelte developers).

When to switch from React to Svelte

Svelte is an amazing option for building a complex website or web app. Many established companies have started using Svelte for internal and external applications:

This doesn’t mean that you have to put your current React apps into the trash though!

So when is it the right time to reach for Svelte?

When is not the right time to reach for Svelte?

These are quickly not becoming an issue but do require some research and due diligence before diving in.

This article has given you an overview on:

With these comparisons under your belt, you should be able to make a decision on if you want

The best advice I have though is to jump in and try to build something in Svelte. If you’ve come from React I can almost guarantee you that you’ll appreciate the simplicity and speed.