A Practical Guide to Providers in Angular

When creating apps with Angular, you can add and configure dependencies for the application you’re building using something called “providers.” You use the built-in Dependency Injection (DI) system to create providers. This post will cover Angular’s powerful DI system at a high level and demonstrate a few practical use cases and strategies for configuring your dependencies. Let’s get practical!

Dependency Injection decouples the creation of a dependency from using that dependency. When you use DI, it promotes loose coupling within our code – a foundation for creating well-architected software. Practicing good software design patterns yields flexible, maintainable software that allows our applications to grow with new features more quickly. And by using DI, we can change the dependent code without changing the consuming code! Seamless code switches are nearly impossible with tightly coupled code, where you might have to touch everything to make a small change.

The cool thing is Angular has DI built-in and helps set us up for success. How handy!

When you use the Angular CLI to generate a service, it automatically adds the code to register the service within Angular’s DI system for us. 🎉 Services contain business logic code that we want to keep separate from view logic.

When Angular CLI generates a service, it adds an @Injectable() TypeScript decorator, which is the bit of code that registers a service within the Angular DI system:

Without doing anything else, we can use our dependency in the application by injecting it into the consuming code as a constructor parameter:

In Angular v14, you have a new option to use the inject() function instead of injecting the service into the consumer as a constructor parameter.

Angular CLI is 💯! The generated service allows you to start using your service immediately, and the Injectable() TypeScript decorator is tree-shakeable so it’s an all-around win!

Another way to register dependencies is to provide them manually through the providers array. Different Angular building blocks accept providers in the metadata. So you can register a provider like this:

There’s something else to note, though. Angular’s DI system allows you to provide a dependency to different places within the application. We saw this example in the first code snippet of the @Injectable() TypeScript decorator. Angular CLI automatically generates:

The Injector is the mechanism for handling DI. It manages the dependencies and gives you the dependency you request. Angular has multiple injectors, and the injectors are hierarchical. 💫 There are different categories of injectors – Module Injectors, Element Injectors, and a special fallback injector called the Null Injector. Whenever I think of a hierarchy, I can’t help but think about a tree. 🌳 So we can visualize the injector hierarchy like this. 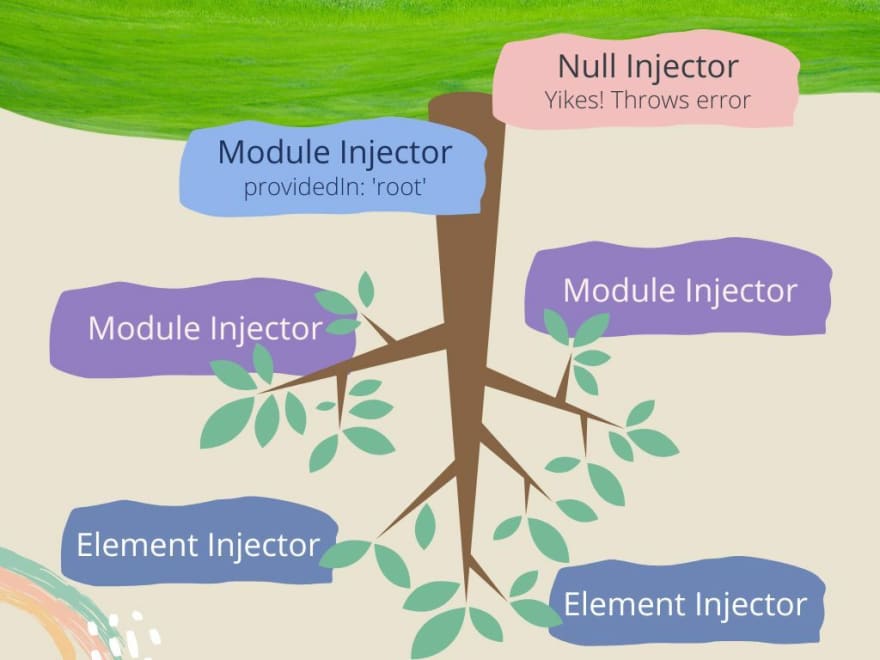 Going back to the example we had above when we use the instruction providedIn: 'root', what we’re doing is providing to a particular module injector, the Root Injector.

You can configure the providers array in other modules and Angular building blocks, such as components and directives. This means you can create an instance of a dependency available to your module and everything in it or only to your component. You might consider these options if you need a 1:1 relationship between an instance of the dependency and the consumer, such as if you maintain state specifically for a module or component within your dependency. Be careful to avoid causing unnecessary complexity, though!

In Angular v14, you can provide to routes as part of your route paths definitions! Angular v15 deprecates a confusing option for the providedIn configuration called any used explicitly for lazy-loaded modules, as well as assigning specific modules in the configuration.

Because you can provide to so many different places, Angular has to resolve which instance of a dependency you get when you consume it. You’ll get the provider you configured closest to the consuming code as a general rule, and move up the tree to find the requested dependency. 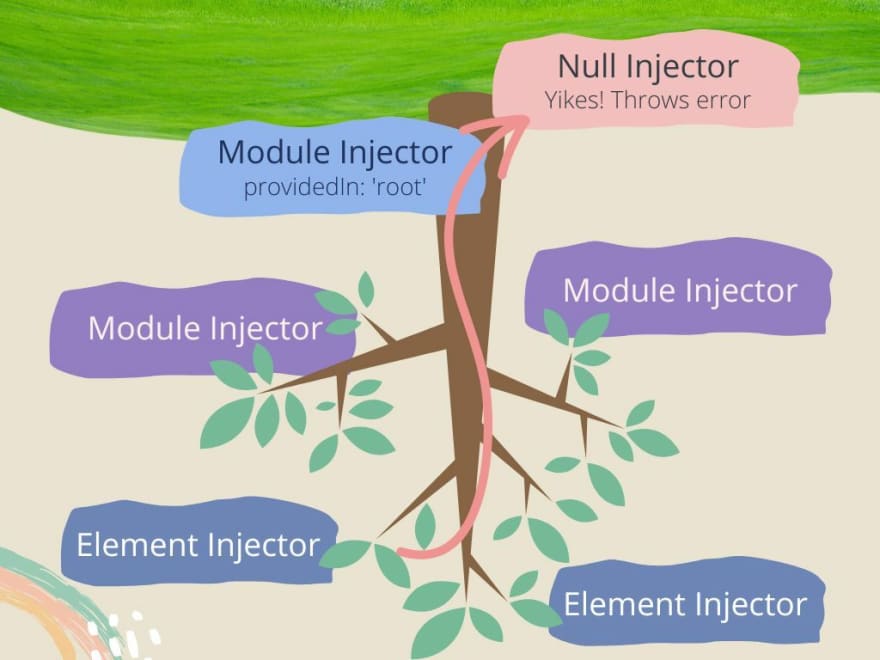 Still, this resolution process is complex, and it can be difficult to figure out what’s going on when using a dependency with such a complicated setup. Fortunately, the Angular team announced plans for better debugging tools that help us understand where a dependency comes from. 🎉

As with most things, the most straightforward, simplest approach is best. If you can get away with providing to the Root Injector so that you only have one instance of dependency for your application, then you should. 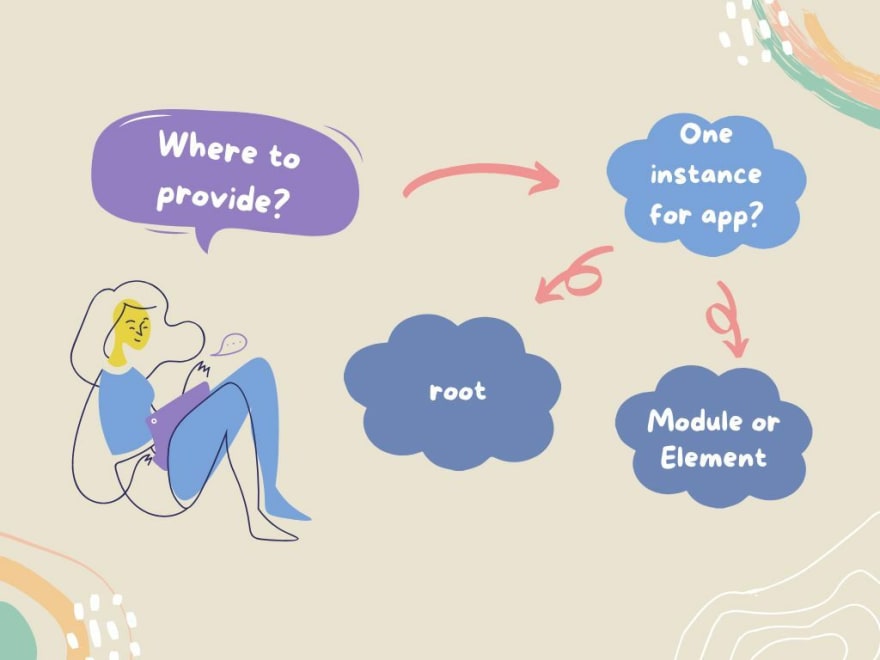 While having this level of configurability sounds unnecessarily complicated, it allows you to fine-tune which dependency to use in your consuming code. Now that we have a quick overview of how and where to provide dependencies let’s review an integral piece of Angular’s DI system, injection tokens.

You can register the token to Angular’s DI system and return the default configuration by providing the type, a description, and options like this:

When you want to use the USER_CONFIG_TOKEN, you will use the @Inject decorator:

We can use injection tokens and configure providers within Angular’s DI system for more power and fine-grained control.

You can configure the providers array to add fine-grained control to your providers. When combined with injection tokens, we can unleash a lot of power. But first, it’s essential to know when it makes sense to do so. Always prefer the most straightforward, default way of registering a dependency and then use fine-grained control as needed.

To configure the providers array, you add an object containing the instructions like this:

Next, let’s walk through examples of each configuration option to understand how to use them.

The useClass option replaces the current dependency with a new instance of another class. This is a great option if you’re refactoring code and want to substitute a different dependency in your application quickly. Let’s say you have a language learning app and an Angular service that wraps the authentication calls you delegate to an auth library and an auth provider. We’ll call this service AuthService, and keep the code straightforward like this:

In a stroke of luck, a large tech company decides to buy your language learning app, requiring you to authenticate using their social login only. You can create a new authentication service that wraps the calls to their auth provider and keeps the same member names; we’ll call it NewAuthService. (Note, you should not name your services with these terrible generic names. Be a bit more descriptive. )

Because both classes have the same public members, you can substitute the original AuthService with the new NewAuthService by configuring the provider:

The cool thing about having the same public members is that there’s no need to change the consuming code. Angular instantiates a new instance of NewAuthService and provides that dependency to consuming code, even if they still refer to AuthService!

It might not make sense to keep the original AuthService around, so you might want to consider transferring all the code references to use the NewAuthService only. However, the useClass configuration option is a fast way for us to quickly substitute one instance of a class for another, which means proofs-of-concept and quick checks can be super-fast!

The useExisting option replaces the provider with a different provider already existing within the application. This option is a great use case for API narrowing, that is, decreasing the surface area of an API. Let’s say your language learning application has an unwieldy API. We’ll call this API LanguageTranslationService, and it looks like this:

Next, we’ll update the consumer to use the new dependency:

Only the methods defined in the FictitiousLanguageTranslationService are available now. Pretty sweet!

The useValue option replaces the provider with a value. This option is a great use case for configurations and mocking services in automated tests where you need to control the inputs and outputs. Let’s go back to the USER_CONFIG_TOKEN in this example and override it to show a different language instead.

We can override the token:

Now when we use this in the MyUserProfileComponent we’ll see the user’s language is Japanese instead of English!

The useFactory option allows us to use a factory method to create a dependency. This option is a great use case if you have dynamic values to consider when creating the dependency. It’s also how we can use a factory pattern for creating our dependencies.

In this example, let’s say in your Language Learning application, if the user is learning Japanese, we want to show the Japanese flag in the MyUserProfileComponent instead of the default – a checkered flag. The user’s language selection is in the user’s config, so the example code looks like this:

Notice we were able to pass in a dependency to the configuration option. The useClass and useFactory options support passing in dependencies.

Now when we use the configuration in the MyUserProfileComponent we’ll get the Japanese flag instead of a checkered flag only if the user’s configuration has Japanese as their language!

This article offers a high-level overview of Angular’s DI system. As you can already see, it’s a powerful system with many different configuration options and complexity. As a result, even though Angular has these configuration options, using the most straightforward approach will make troubleshooting and maintenance easier! 🏆

Angular’s documentation has great resources! There are many docs on Dependency Injection since it’s such a broad topic. Here’s where to get started – Dependency injection in Angular.

This post was originally published on the Okta Developer blog. I am the original author and made modifications.

How to make API requests with Axios and React JS. ✨

Node.js visualized: promise, async/await and process.nextTick under the hood

Posted On : November 28, 2022
Previous post I made 1200+ ⭐️ stars on a Github repo! Here are some simple tips that helped me!
Next post Geo-routing with Apache APISIX